It was a well earned reputation for Gilbert Bernard and Roselène Gelin, residents of Cité Doudoune, a locality in the municipality of Croix-des-Bouquets entirely under the control of the 400 Mawozo gang.

The couple would celebrate 27 years together in early 2023. 27 years of hard work during which they built a home to raise their five children in the Christian faith, with respect for principles.

The family lived away from the hustle and bustle of the community, neighbors told HB News. 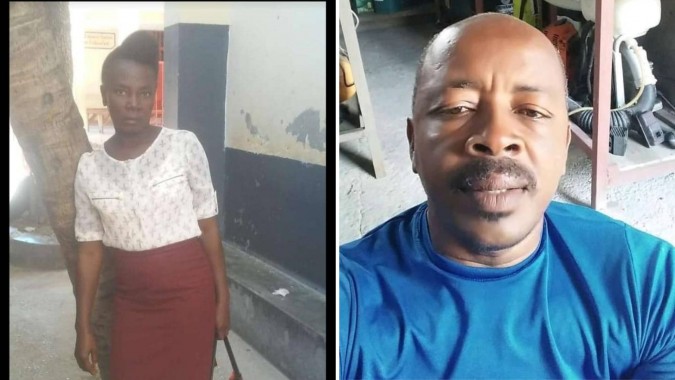 Until the Sunday morning of November 13, 2022. The couple was returning from a religious service at the Église la prophétie de Sans Fil (Church of the prophecy of Sans Fil) when a neighbor came up to Gilbert Bernard with a warning: “Dominique, the dreadful gang leader, is actively looking for your son, Ernandez Bernard.” The 24-year-old is the only child in their home; the others live elsewhere.

The couple would celebrate 27 years together in early 2023.

Dominique accuses Ernandez Bernard of being the spy who informed the police of the comings and goings of his soldiers, so-called Jean Alex and “Ti Vwazen”. These two individuals, known for their criminality, were killed during an operation by the national police in Tabarre, according to a note published by the PNH (Haitian National Police) on November 11, 2022.

Ernandez Bernard knows the two men very well. “In 2019, I had broken off all contact with them because I suspected them of being in cahoots with the gang led by Dominique”, the orphan tells HB News.

According to Bernard, one of them is called Kervens Casseus. “He is the son of a neighbor, next to the house where I lived. I called him ‘ti vwazen’,” explains Ernandez Bernard.

It is also this name, slipped into the Facebook note released by the PNH to announce the news, which was used by the gangs to attack the family of Ernandez Bernard. “People in the area believe that the name Ti Vwazen, associated with Kervens Casseus, could only have been communicated by me to the PNH, says Ernandez Bernard. But I have never been a spy for the police.” 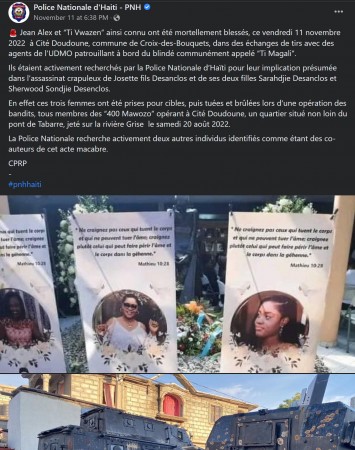 After receiving the neighbor’s warning around 11 a.m. on Sunday, November 13, Ernandez’s father asked him to leave the area “immediately” because his life was in danger.

“I couldn’t hold back the tears when he took me to a tap-tap” says Ernandez Bernard.

Around one o’clock in the afternoon, the young boy received a call from his father. “ The gangs have us,” the 53-year-old man said on the phone.

Ernandez Bernard goes to the Central Directorate of the Judicial Police (DCPJ) to ask for help: he receives none.

Dominique’s armed and hooded men arrived at Gilbert and Roselène’s house. They took them with them, reveals a resident of Cité Doudoune, who witnessed the incident. He requested anonymity for safety reasons.

“Gilbert Bernard and Roselène, 47 years old, loved each other very much, they were good people” says Pierre Edouard Predelus, a close friend of the family, a philosophy student.

Roselène Gelin sold cosmetics in the neighborhood. She did not get involved in the ongoing debates about the involvement of the bandits Jean Alex and “Ti Vwazen” in the violent murder of Josette Fils Desanclos and her two daughters Sarahdjie Desanclos and Sherwood Sondjie Desenclos in August 2022.

The brutal murder of the couple put the residents of Cité Doudoune in even greater fear. Several families had to flee to escape the gangs’ wrath. Those who remain are those who don’t know where to go. Ernandez Bernard and the rest of the family are in hiding.

The death of “Kolèg”, an active member of the 400 Mawozo gang, shot on August 3, 2022 during a police intervention in Croix-des-Bouquets, did not put an end to the activities of bandits in the municipality.

The brutal murder of the couple put the residents of Cité Doudoune in even greater fear.

Vulnerability is very high in Cité Doudoune, says one resident. Most young people don’t have jobs. To survive, some of them join the bandits.

Sometimes young people are paid to attend political meetings,” says Bernard. He says he was invited to attend one such meeting under the leadership of Dominique’s wife. “Several young people from the neighborhood were there. I didn’t go,” says Ernandez.

Read also: In Haiti, gangs are burning the bodies of their victims

Today, some parents are trying to move their children out of the area to avoid being recruited or attacked by gangs, said the Cité Doudoune resident quoted above. Some are taking refuge in the Dominican Republic, the witness added.

On their side, the neighboring republic has been hunting down Haitians in recent months.

Journalist Diego Charles and activist Marie Antoinette Duclaire were murdered on the same day, June 2021 It was about 11:45 PM when Grégoire heard the…