The residence of the president-elect had just been attacked. Shooting began at about one o’clock in the morning. At half past two, Léon Charles, Director of the Haitian national police (PNH), went to Place Saint-Pierre, seven minutes away from the scene. Surrounded by the highest officials of the PNH, the former head of the coast guard had to answer to the most important event of his career on this July 7, 2021.

Léon Charles walked. He tapped on his phone. Talked with Dimitri Hérard, head of the general security unit of the national palace (USGPN). But does not issue any orders to intervene.

Agents of the USGPN came to Place Saint-Pierre. They wanted to intervene. They asked for it. They insisted. But nothing. It is a complete blur. Is President Jovenel Moïse already dead? No ensuing inquiries would answer this question.

Léon Charles did not seem to be in a hurry. He left the square with some of his lieutenants a little before four in the morning for an unknown location, a senior PNH official present at the scene told HB News. The order to intervene came much later. “Between ten and eleven o’clock in the morning,” the PNH official said. Why such a delay? “My answer may cause harm, he says. Instead of saying something that may hurt, I prefer to keep quiet.”

More than a year after the magnicide, Léon Charles continually represents Haiti at the Organization of American States. He held this position before becoming the Director of the PNH again in November 2020. While the director could quietly submit his resignation before being offered a prominent diplomatic position, other occupants of Place Saint-Pierre that morning did not have the same fate. For example, the very influential Dimitri Hérard is languishing in a cell in the national penitentiary for having failed in his mission to protect the president. 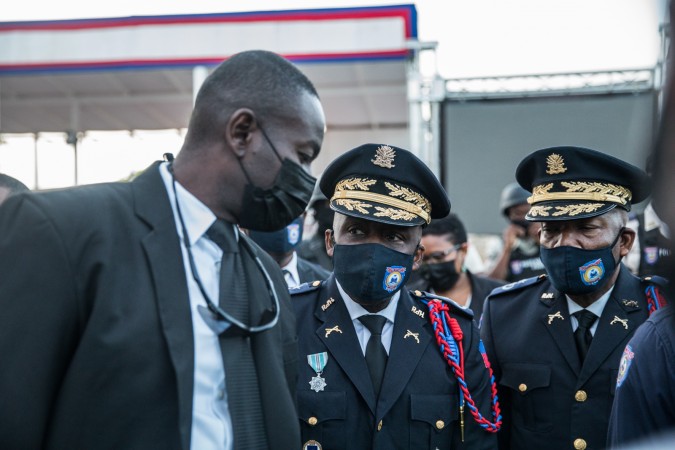 Observers wonder about Léon Charles’ behavior during this bloody event. Until his departure, he oversaw the investigation of the central directorate of the judicial police (DCPJ) as Director. “He should have been removed from the PNH to facilitate the investigation,” said Pierre Espérance of the national human rights defense network (RNDDH).

Long before the former director resigned, DCPJ investigators in charge of the case say they were pressured, according to information gathered by HB News. At least one of them was summoned by the inspectorate general in a way that suggested the lot of them were under control and in danger.

Léon Charles did not respond to HB News’s requests for comment. The former head of the PNH is accused of complicity in the assassination. “He hid suspects such as Joseph Félix Badio and John Joël Joseph, adds Pierre Espérance. He was rewarded after his departure. The government protects him.”

On December 16, 2021, Léon Charles went to a hearing at the office of Judge Garry Orélien, who oversaw the investigation of the death of Jovenel Moïse. The Director of the PNH feared an arrest. He arrived at the meeting with 53 officers on duty in seven cars. 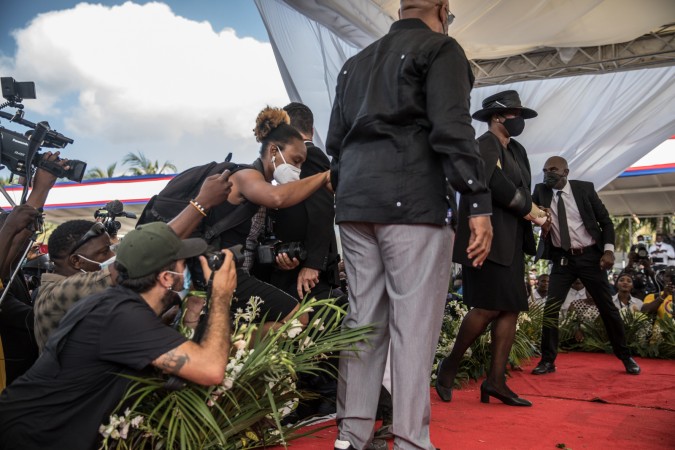 In January, RNDDH reported the payment of two million gourdes to the magistrate to not arrest a police chief after his hearing. A source told HB News that this was Léon Charles. In April 2022, the superior council of the judiciary placed Garry Orélien on leave without pay for corruption.

“Léon Charles has no place in Haitian diplomacy, maintains Pierre Espérance. He must be removed and put at the disposal of justice. To keep him in this position is to protect him.”

Léon Charles was the Director of the PNH for one year until he was fired for inefficiency in 2005. Under his command, fifty police officers and hundreds of civilians were murdered. Several dozen more police officers were killed during his second mandate at the head of the institution. The most publicized case remains the public lynching of five officers on March 12, 2021, during an operation denounced for its lack of professionalism in Village de Dieu.

After the 2010 earthquake, Léon Charles found himself in the information department of the Minister of Justice, Paul Denis. He worked with Joseph Félix Badio, another suspect in the assassination of Jovenel Moïse, known for his relationship with the current Prime Minister, Ariel Henry.

The authorities arrested about forty individuals after the magnicide. Four of them were released by Garry Orélien. Another died under mysterious circumstances, while three others, arrested abroad, are beyond the reach of Haitian justice system.

Last May, a fifth judge was selected to conduct the investigation. The previous magistrate had never received the file. He publicly denounced the authorities for their inaction and unwillingness to investigate.

According to the DCPJ report, the former president had called on his legal bodyguards for help. Léon Charles was among the first. According to reports, the director was also in contact with several individuals involved in the assassination. “I stayed with the director to see what he was going to tell us that morning, said the senior PNH official. We were all waiting for word from the commander, but no order came from him.”

In “Dubai”, Haitian prisoners sleep in feces, without drinking water or food. Cholera is already inside the National Penitentiary, but the statistics that are reported…