It was about 11:45 PM when Grégoire heard the deafening sound of  gunshots on the evening of  29 to the 30, of June 2021. His two brothers were not yet in their room. “I immediately thought they might be among the victims. Then  suddenly I heard screams,” says the older brother of the deceased.

Gregoire jumps onto  the street. He stumbles upon a corpse: it is the body of Anderson Grégoire bathed in blood. “My little brother was 25 years old, he says, on the verge of tears. I was already out of breath and didn’t know what to do.

A few meters away from Anderson Grégoire’s corpse, other lifeless bodies  swim  in their still-warm blood. “Odenel Grégoire, my other younger brother, 34 years old, was among  them. That night we lost two members of our family”, he states.

Grief can wait. Grégoire  faces a much bigger problem: how to break the news to his mother, who had only just returned to Port-au-Prince for a medical appointment. “She was already seriously ill,” explains the elder of the family. 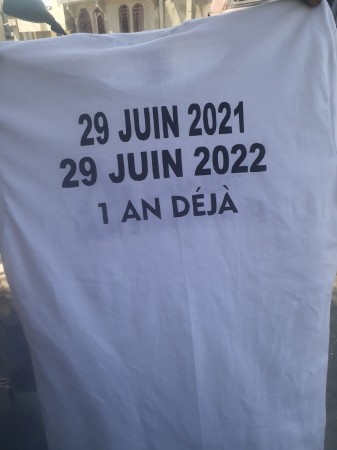 At least seven residents of Delmas 32 had perished on the bloody night of June 29-30, 2021. According to a report by the Réseau national de Défense des Droits (RNDDH), at least fifteen people were killed in the  carnage. Police officer Guerby Geffrard, journalist Diego Charles and activist Antoinette Duclaire were also murdered on the same day, well before the tragedy that took place in Delmas 32 .

The families made to mourn  that night still have memories of the massacre. Widline Méliane still remembers when she received the call  announcing  the death of her husband, Yvenold Léger, age 39.

Léger was killed inside his store on the rue Dessalines  in Delmas 32. The criminals released  tear gas to confine  people to  their homes, reveals  a next-door neighbor who did not want to  offer further details.

That evening, Méliane had not set up  her fried food stand . “Otherwise, I would have been killed next to my husband,” she says, with tears in her eyes. This mother of two daughters had borrowed money to organize the funeral and take care of her girls.

Frantzso Siprion, a resident of rue Dessalines , also lost his father, Louira Siprion, and several of his friends in the tragedy.

The  City Hall of Delmas had proceeded, after observations, with  the removal of the cadavres . This governmental entity  refused to let the parents take charge of their deceased loved ones. According to the residents of the area, the Justice of the Peace had informed them that the government would take care of everything. 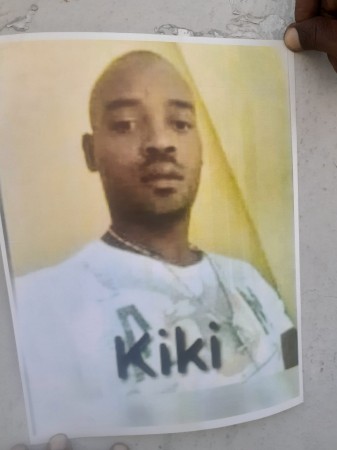 Fifteen days after the tragedy, the families were never contacted. They had to take it upon  themselves to recover the bodies of their loved ones in order to organize the funerals. The Grégoire family had paid 50,000 gourdes for the recovery of their two cadavres .

Other victims’ families had to face the same situation since the funeral home  had refused to deliver the corpses without payment. Frantzso Siprion had to negotiate with the person in charge of the morgue to organize the burial of his father in order not to pay the 75,000 gourdes due in exchange  for the cadavre.

When contacted, the Delmas City Hall and the funeral company refuse to comment  on  the case. “I cannot offer any  explanation  regarding  the link between the company and  city  hall. This is an internal matter for the company”, reveals  a manager from  the funeral home .

Out of fear, none of the victims’ families wanted to file a complaint after  this catastrophe . “We will take legal action when there is a judicious government ,”  bellows the eldest member of the Grégoire family, who says he expects nothing from the authorities.

One year after this wave  of murders, only the family of  journalist Diego Charles decided to file a civil suit  in the case of the people murdered at the end of June 2021.

“The only thing I can confirm is that the case was transferred to the  Prosecutor’s Office and  an investigating judge appointed,” District Attorney,  Jacques Lafontant told  HB News.

The situation is delicate. Even the lawyers of  the  Diego Charles family request anonymity to protect themselves. “We are following this case closely, says one of the two . It is up to the justice system to do its job. 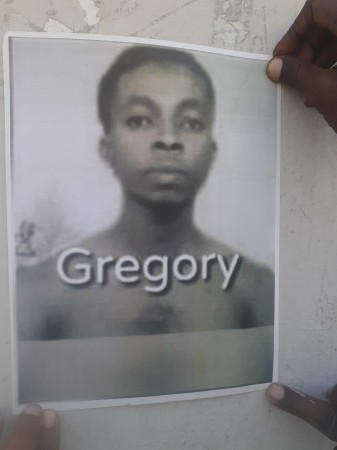 Last year, the day after the tragedy, the Director General of the Police nationale d’Haïti (PNH) at the time, Léon Charles, attributed the Delmas 32 massacre  to  a group of police officers  called Fantom 509. On the other hand, the report on investigations led by RNDDH  attributed the massacre to the Krache Dife gang, a member of the G9 an Fanmi e Alye gang, which is known to be close to the government of the time.

HB News tried unsuccessfully to contact the family of Marie Antoinette Duclaire before publishing this article.

One year after the bloodshed,  Wednesday, June 29, 2022,  Delmas 32 is rather quiet. No ceremonies  tribute or wreath-laying.

A stone’s throw from the scene of the tragedy, a speaker blasts  the song Pwen Final by the rap group BIC and Steeve Khe. “We didn’t want to do anything for fear of further retaliation,” explains one of the neighborhood leaders. He refuses to give his name for security reasons.

Without retirement and health insurance, some seniors are living in hell Lire ce texte en Français  This Wednesday, June 22, 2022, Marie-Ange Auguste sold half…

They’ve seen scorched bodies. Children missing. And the destruction of their families.  Since the beginning of hostilities on July 7, 2022, dozens of families fleeing…

They’ve seen scorched bodies. Children missing. And the destruction of their families. Lire ce texte en Français Since the beginning of hostilities on July 7,…