No official in Haiti can claim to be more powerful than Daniel Foote right now. The special envoy of President Joe Biden on the Haitian crisis can decide who can be president or prime minister of the country. His presence eclipses that of Helen La Lime, representative of the U.N.’s bureau in Haiti (BINUH), who had been acting as proconsul before Foote’s appearance on the scene. If outside interference wore the costume of diplomacy in the old days, today, it’s clear that the U.S. is openly controlling power in Haiti. Here’s the problem: A complete meltdown of the country’s institutions, notably during the past eleven years.

History will not forget that elite squads of the national police force, trained and supported by the U.S., lost face, as well as six officers when confronting a group of bandits in the Village de Dieu shantytown, nor could this same police force prevent the assassination of the most protected man in the country, President Jovenel Moise. 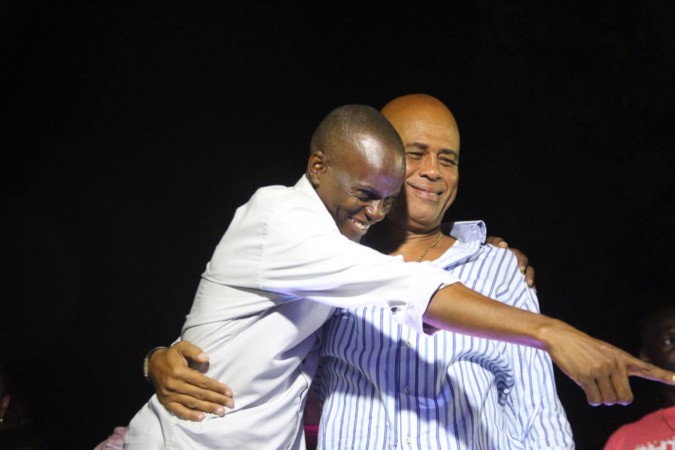 Some will say that when you’re trying to identify the cause of the permanent crisis in Haiti, it’s easy to point the finger at outsiders, especially the United States. To understand consequences from their root causes, it would be unhealthy not to attribute the U.S. the full measure of its responsibility for this debacle. To pretend otherwise would be to deny an important truth, which would please many American politicians.

Forbes magazine reports that the war in Afghanistan cost the U.S. $300 million every day for twenty years. Around $83 billion dollars were spent to train and arm the Afghan army. This same army didn’t stand up to the assaults of the Taliban after the U.S. announced its retreat from the country. When he had to justify the reasons for this American debacle, Joe Biden pointed the finger at the Afghanis.

« We gave them every opportunity to create their own destiny, » he said on August 16, 2021. “What we could not give them was the will to fight for that outcome.” This has a bit of a feeling of déjà vu for us in Haiti.

After the 2010 earthquake, the international community seemed to offer this same opportunity to Haiti. Billions of dollars were spent in the name of Haitians for the reconstruction of the country but no results of those investments were visible. Former American president Bill Clinton directed the Interim Commission for the Reconstuction of Haiti which channeled hundreds of millions of dollars of aid and promises of aid.

After the disaster of the 2010 earthquake, Haiti wasn’t ready to organize elections that same year. But, in spite of the dozens of thousands dead and more than a million homeless under tents, the international community—as usual—decided elections should be organized anyway. So it is that Michel Martelly was designated, president. USAID financed his supporters during the electoral campaign. The French ambassador at the time, Didier Lebret, showed his true colors publicly, wearing the pink and white bracelet of Martelly’s party. 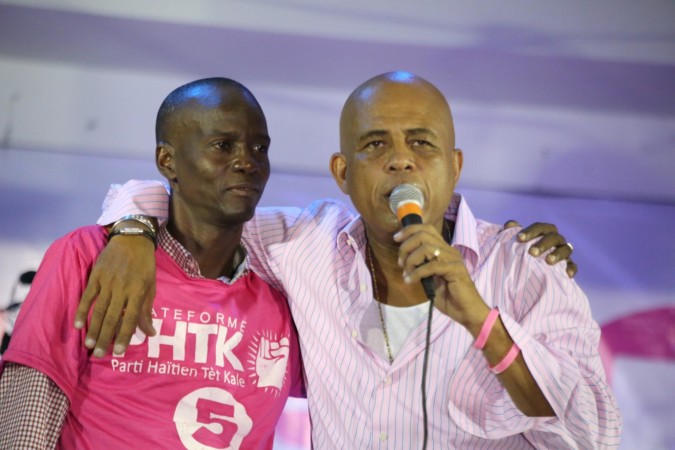 Michel Martelly ran a government that was among the most corrupt in the history of the country. More than 64% of the Petrocaribe funds were spent during his administration. The party he created, PHTK (Parti Haitien Tet Kale), prioritized policies of the dismantlement of public institutions and gangsterization of the country. When Martelly’s little dog Jovenel Moise followed him to the presidency, Moise doubled down on his master’s impunity and corruption. As a result, hundreds of Haitians were massacred in opposition neighborhoods; hundreds more were kidnapped, hundreds were raped.

Beginning in 2018, Haitians turned out in the streets for the country’s biggest demonstrations ever. Young people took to the streets in considerable numbers to denounce corruption and demand accounting for the Petrocaribe monies. Their Petrocaribe movement was also a useful pretext for hundreds of thousands of average Haitians to demonstrate their concern about the dangerous dysfunction of the state. A Petrocaribe trial would have great symbolic value.

Eleven years later, the U.S. has sent its special envoy into the midst of an unprecedented crisis in Haiti. Since the upheavals of 2018, the country has fallen into a cycle of instability that has its character. There were the Petrocaribe demonstrations, the Peyilok strikes, the street law of the gangs, the kidnappings, and the massacres in targeted neighborhoods.

Daniel Foote has now come to collect the debris of a regime that was put into place in Haiti with U.S. support in 2011. In 2017, the Banque de la Republique d’Haiti has stopped publishing its annual report that gives an idea of the country’s economy, a report regularly issued since 1998, even after the earthquake in 2010.

In May 2011, when Michel Martelly became president, the National food security council reported that the cost of the food basket was 837 HG per person per month. In April 2021, the cost of the basket had risen to 2112 HG. Meanwhile, hundreds of millions of dollars were being siphoned off by the powers that be,, and corruption scandals were ubiquitous. After 11 years. The general hospital is not rebuilt, nor the presidential palace, nor the parliament. Gangs have multiplied, and along with them, violent crime.

When the youth of Haiti went out into the streets to demonstrate against corruption, the U.S. did not support them. Because of their involvement, some of them lost jobs and the support of their friends. Several Petrochallengers, as they are called, had to leave the country because of threats against them. The assassination of Antoinette Duclaire, a young, outspoken rights activist, was understood as a message to those who publicly stood up against corruption. No one has been arrested for her killing. Today, such impunity is so profound that even the president of the Republic has become its victim, with even the security team he selected incapable to enlighten us about his murder.

There is undoubtedly an overwhelming popular mandate against corruption. But can we remake the country with these old figures still trying to run it? 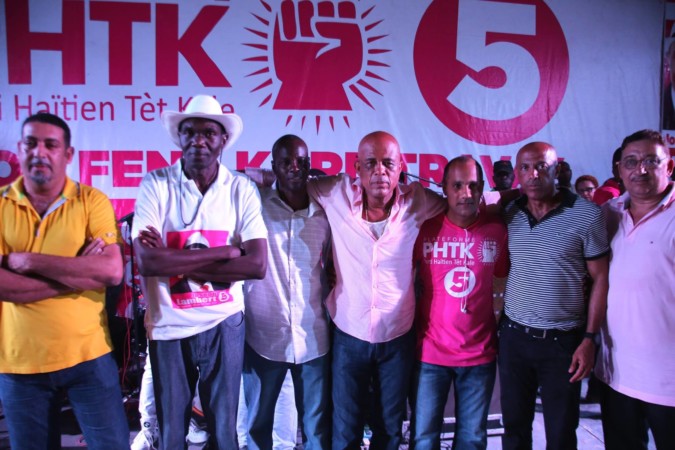 On the one hand, there is Joseph Lambert. “I think, and I insist, that an experienced political personality is necessary to conduct the ship into port,” said Lambert on September 1. Twice a senator and president of the Senate, Lambert was always there when the ship of state was adrift. He typifies the blasé political class that reduces governing into a simple sharing of small privileges.

Then there is Laurent Lamothe, whose name in Haiti is forever automatically linked to the Petrocaribe scandal. Yet, meanwhile, he puts himself forth in the international media as “an acceptable voice” to discuss the country’s crisis and, indeed, to provide solutions.

Besides the pandemic, Biden’s first year has been marked by two great crises, the immigration crisis the debacle in Afghanistan.

To curb the flux of migrants crossing Mexico’s border into the U.S., the Biden administration has decided to attack the problem at its source. This means resolving the problem in the migrants’ country of origin, where all the conditions force them to leave to seek a better situation elsewhere. Biden delegated this work to vice-president Kamala Harris, who has targeted corruption as the crux of the problem. During her visit to Guatemala, Harris spoke about the need to fight corruption and establish justice systems.

“Most people don’t want to leave their homeland, the place where they grew up, the place where their language is spoken, the culture they know. Most people don’t want to leave the country where their grandmother lived. And when they do leave, generally it’s for one of the following two reasons: They are fleeing some violence, or, should they remain, they will not be able to satisfy the basic needs of their families,” Harris said.

During the last eleven years, tens of thousands of Haitians, especially young people, have fled the country to go to Brazil to Chile. Thousands are now together at Mexico’s northern border, hoping to get into the U.S. After the 2010 earthquake, their despair mainly was economic. Today, that poverty is not coupled to the gang violence in Haiti’s streets, which is pushing tens of thousands more to leave their homes and get out of the country. How will the U.S. react when thousands of boat people arrive on the coast because of gang violence that’s fed by the Haitian powers that be and by Haiti’s private sector? 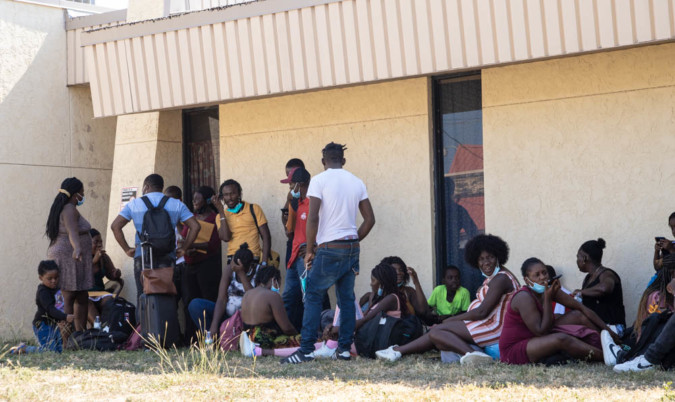 To reform American policy in Haiti means correcting the mistakes made in 2011. Unfortunately, the power of the Martelly/Moise/Henry PHTK regime is a pure product of the Democratic administration of Barack Obama and his Secretary of State, Hillary Clinton.

So many of those who took to the streets to denounce corruption have now left the country. With kidnappings and rapes increasing, thousands of professionals have already left. The is now open to the political mafia and the predatory elite to devour the entrails of those who have not yet decided to leave. Although the state is dead, the vultures of the traditional political class are nonetheless fighting over this rotting cadaver. SO many want to become president by demanding that we find out how a president could have been assassinated in his bedroom without a single security agent receiving a scratch or firing a shot.

If we’re going to reconsider U.S. policy in Haiti, we have to consider the actors’ liabilities. So many among them who now present themselves as future leaders are the same ones who participated in the demolition of the country over the past thirty years and more.

The original version of this article was published in French. The English translation is from Amy Wilentz.

The Core Group is said to make crucial decisions sometimes on behalf of Haiti without the involvement of the Haitian government. I wonder who will…

Li tèks sa an kreyòl From: The People of HaitiSubject : Appreciation letter to the coalition countries “Friends of Haiti” November 11, 2022 Our dear…

The international measures, including those of the United Nations from October 21, 2022 on the crisis that has become endemic in Haiti, do not address…

The Americans mined a million tons of guano on the island without paying a cent to the Haitian authorities. Other countries have sold the product…